A complete list of the beaches along the Sunset Coast Ceara or the West Coast Ceara. The beaches often referred to as North West of the capital between Fortaleza and beyond Jericoacoara to the State of Piaui. In Portuguese the Litoral Oeste do Ceara or the A Costa do Sol Poente! 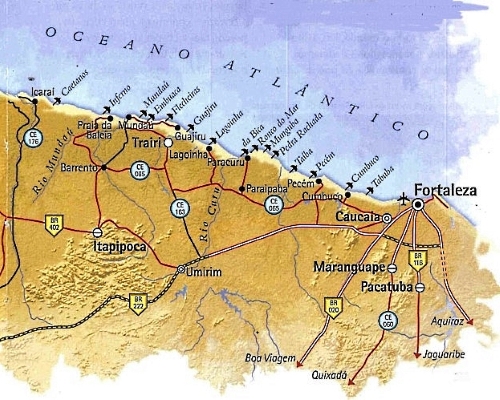 This small beach is the first along the Sunset Coast Ceara or West Coast and gets visited mostly by those escaping the city for the weekend and enjoy the atmosphere. Praia dos dois Coqueiros is 26 kilometers from the capital.

Praia de Iparana is 28 kilometers from Fortaleza. There are some beach restaurants and the SESC Resort.

Praia do Pacheco is worth a visit just for its long and quiet stretch of white sand. For those arriving by car, you the beach can only be reached on foot.Pacheco Beach is 29 kilometers from the capital.

Praia de Icarai with its blue ocean waters, white sand and great wave conditions for kite and windsurfing is 31 kilometers from Fortaleza. In addition, it has good infrastructure with small hotels a supermarket, snack bars and pharmacies.

The Traffic and road that leads to ore popular Cumbuco passes through Praia da Tabuba. The very relaxed atmosphere of Tabuba is ideal for quiet walks or simply relaxing on the beach. Located 35 kilometers from Fortaleza.

After passing the 40 kilometer marker from Fortaleza lies Praia do Cumbuco. A fishing village transformed into a hippie village at night. The clear sandy beach is one of the most popular of all the beaches along the Sunset Coast Ceara to Kitesurf!. If you are traveling by car, it is important to fill up in the last Gas Station here before heading up the Sunset Coast Ceara.

The Coconut plantation that aside the white sand beach provides an indescribable backdrop for a beautiful landscape. Barra do Cauipe is 30 miles from Fortaleza. Hike to the Cauipe Lagoon and enjoy the adventure.

Praia do Pecem has firm sand a reef and a good tourist infrastructure. The states Main Cargo Port is situated here. Pecém is 55 kilometers from Fortaleza.

Praia ds Taiba with the Turquoise sea on one side and white sand dunes on the other, with good restaurants and comfortable pousadas or guest houses. Taiba Beach is 67 kilometers from the capital Fortaleza.

Praia do Barramar is a small and quiet beach 78 kilometers from Fortaleza. Barramar Beach is best known for the location where the Brazilian comedian Renato Aragao has his vacation home.

DE PERICOARA (ZÉ SENA) Pericoara Beach is tranquil place 84 kilometers from Fortaleza. A meeting point and rest stop for the fishermenn and their sailboats or Jangadas. Sea views with coconut trees in every direction.

Paracuru is the only municipality in the interior of Ceará with its headquarters situated on the coast. Paracuru has 20 kilometers of beaches along the Sunset Coast Ceara west of Fortaleza that the locals and fishermen call by different names including praia da Barra, praia Carnaubinha, Pedra do Meio, Bica, praia da Munguba, Ronco do Mar, Boca do Poço, Pedra Rachada, praia Quebra Mar, praia do Buraco, praia do Vapor e praia da Piriguara. Paracaru Beach is 88 kilometers from the capital with an has an estimated population of 40,000 inhabitants Throughout its urban area has several beaches, with vast coconut trees, reefs, sailing boats and good lodging infrastructure.

Lagoinha Beach is one of Ceara Brazil's most popular postcards; shaped like a half moon, with an adjoining lagoon with calm waves that fall on to white sand. The accommodation and tourist services are of good standard and is 118 kilometers from the capital Fortaleza along the Sunset Coast.

Praia de Flecheiras (147 kilometers from Fortaleza along the west coast Ceara) with the adjoining beach and fishing village of Guajiru. Pedra Chata, known for as a summer house retreat, Palitô with a small port for boats, and Pedra Rasa which serves as a meeting point for the fishermen. In addition there is Emboaca, with only modest facilities to the tourist.

The main road leading to the Praia de Mundau is often covered by the dunes as a result of the strong winds that leave the passage blanketed with white sand. The mouth of the Mundau river surrounded by towering white dunes is one of the most beautiful landscapes along the Sunset Coast Ceara and marks the halfway point between Fortaleza and Jericoacoara along the west Coast Ceara.. Mundau is 164 kilometers from Fortaleza.

Praia de Baleia is characterized by small coves a calm sea and white dunes; 174 kilometers from the capital on the West Coast of Ceara. Visitor will find cozy pousadas, bars and restaurants near the beach. From t Baleia Beach one can visit nearby beaches and fishing villages, such as Bode, Maceió de Itapipoca, Apiques, Caetanos (Sabiaguaba) and Jiqui (Sabiaguaba Pequena).

Icaraí da Amontada also known as Icaraizinho. With waters totally suitable for practicing sailing sports. One of the most popular windsurfing spots along the Sunset Coast of Ceara or the west coast Ceara. There are International championships held here. Located 232 kilometers from the capital Fortaleza. From Amontada there is access to the beaches of Moitas, Patos, lagosteiro de Torrões, Porto dos Barcos and Almofala. 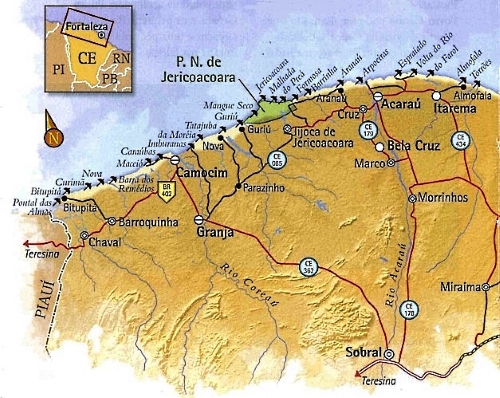 Guajiru de Itarema is surrounded by dunes, coconut trees and mangroves. Sandbanks form designs in the water because of the strong current and waves. There are barracas or beach bar restaurants and small pousadas or guesthouses. Guajiru Beach is located 244 kilometers from the capital. A tour of the region leads to the nearby Farol de Itapaje, volta do Rio, Ostra e Espraiado.

270 kilometers from Fortaleza, Ilha dos Coqueiros is surrounded by white and a mangrove formation, alongside a fishing boat inlet. From the island, it is possible to reach the Timbau Cove and the beaches of Arpoeiras, Curral Velho, Aranau and Barrinha.

Praia de Prea is a small fishing village with perfect wind conditions from mid July to early December. Has 4 star accomodations for International Kitesurfing enthusiasts and only 12 kilometros frpom Jericoacoara. Prea Beach has a stronger surf than Jericoacoara and yet gives the visitor the opportunity to escape the quiet and party there at night. Prea Beach 298 kilometers from Fortaleza on the Sunset Coast Ceara or West Coast Ceara.

Jericoacoara-West Coast of Ceara: Jericoacoara has long been considered one of the most beautiful beaches in the world, surrounded by a National Park an environmentaly protected area. The trip is 320 kilometers-4 hours by car and paved road to the small city of Jijoca, from Fortaleza the capital of Ceara. From Jijoca the visitor requires the local trucks (Jardineiras) or a car with 4 x 4 traction to cover the next 20 kilometers of sand dunes or beach if you choose to arrive from Prea.

Jericoacoara this paradise beach destination is known and admired by tourists from every corner of the planet, who affectionately call it Jeri. The village surrounded by white sand dunes, coconut trees, a clear sea, and freshwater lakes, along with the help from the strong winds create panoramic views in every direction. The main attractions in Jericoacoara are the magnificent beach with its sunset dune, amazing sunsets and the day trips by dune buggy out to Tatajuba and Lagoa Paraisio! For many its the perfect wind conditions between July and December that draw the best Kite and Windsufers from around the world to experience Jeri ! 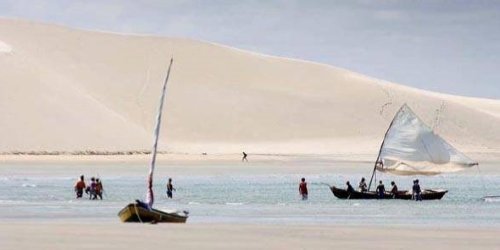 Historicaly dates back to 1613, when a fort called Nossa Senhora do Rosário was built on the site. The following year Jericoacoara was invaded by the French, who were defeated by the Portuguese immigrants and the Indians who already inhabited the area. Walking along its narrow streets the visitor will soon descover that jeri has become an International Tourist Destination. Until around 2000 the village had maintained the aura of an untouchable territory, far from civilization and progress. Although electric power has arrived, there is still no paved road to Jericoacoara and somehow the charm remaines of this magical fishing village remains!

There are over 140 hotels and pousadas to choose from. With a large number of foreigners who now call Jeri their home, while the local seafood dominates the restaurant menus in Jericoacoara you will finda a variety of gastronomic options besides Brazilian Regional, Portuguese, French, Italian, German and others. Strolling through the village past endless shops selling everything imaginable including souvenir, handicrafts, jewlery, beach clothing, and more.

Praia de Guriu remains intact an unspoiled fishing village and one of the most beautiful spots along the Sunset Coast Ceara. The famous Mangrove and river crossing service by raft for the Dune Buggys and vehicles going and coming back from Tatajuba and Camocim. Guriu Beach is 324 kilometers from the capital.

Surrounded by desert, dunes, and the exotic Mangue Mangrove that the buggys pass through on the way to Tatajuba is one of the locals favorite stops.. Popularity has increased since the filming on location of the Global Network Soap Opera's "Tieta". Manque Seco Beach is 328 from the capital.

The name of this beach arose due to the constant displacement of the dunes that changed the topography of the Tatajuba, that is to 348 kilometers of the capital. To reach the beach you have to take a good walk along a wide stretch of sand. Do not forget the sunscreen and stroll along the Dune of the Charm. By the sea you can reach the beaches of Moréia and Imburana. O nome dessa praia surgiu devido ao deslocamento constante das dunas que alteraram a topografia da Tatajuba, que está a 348 quilômetros da capital. Para alcançar à praia é preciso fazer uma boa caminhada por uma larga faixa de areia. Não esqueça o protetor solar e curta o passeio pela Duna do Encanto. Pela beira-mar é possível chegar às praias de Moréia e Imburana.

Camocim is the last municipality on the Sunset Coast Ceara and west coast of Ceara that starts about 60 kilometers from the Center of Jericoacoara with a little more than 67 thousand inhabitants. Camocim beach is a beutiful setting near the mouth of the Coreau River. Surrounded by mangroves dunes and small sandbar islands.

The Camocim Carnaval is one of the most popular places to celebrate Carnaval along the Sunset Coast Ceara or West Coast Ceara. Recieves thousands of visitors every year, and boasts one of the best parties during the Carnaval holiday. The Fishing Industry work force is what keeps the region busy. The architecture of the city is Colonial nineteenth century. Camocim is about 380 kilometers from Fortaleza with an additional 45 kilometers of beach along the west coast of Ceara before reaching the border of Piauí.

The beaches withiin the municipality of Camocim are Barreiras Beach and 3 km after Praia do Foral do Trapia with the old lighthouse and some hotels nearby to welcome visitors. Despite the limited space for sea bathing, a belvedere on the cliff provides the visitor with a beautiful view. Praia das Barreirinhas is 3 kilometers beyond the Camocim center and 386 kilometers from the Fortaleza on the Sunset Coast or west coast of Ceara.

The beach of Maceió is located 16 kilometers from the Center of Camocim, located in an environmental protection area. Known for the beautiful landscapes where visitors come to practice snorkeling and diving. Maceio Beach Is is 396 kilometers from Fortaleza.

Praia de Bitupita is the last beach along the coast of Ceará, 402 kilometers from the capital Fortaleza. It has several white dunes with a dense coconut mangrove. The sea is calm and great for bathing. From Bitupita Beache there is possible to visit nearby Pontal das Almas and take a boat trip.

Praia dos Remedios is a simple Fishing Village with soft sand and constant seabreeze; 34 kilometers from Camocim on the west coast Ceará. The soft sand and seabreeze. From here you can visit to Curima, andPraia Nova, another village in the region. 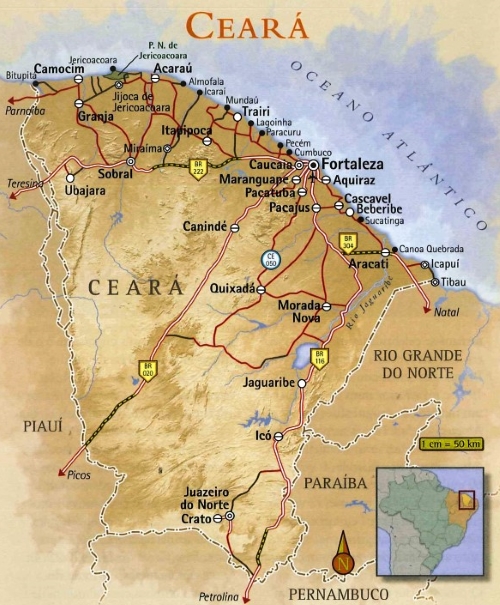 Visit the beaches along the West Coast Ceara !