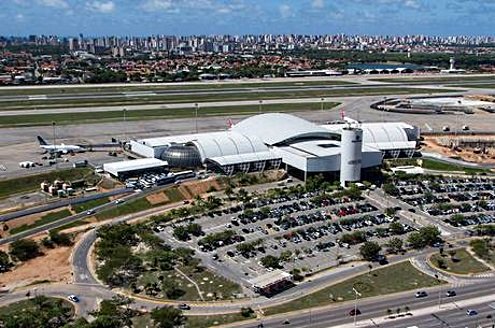 A few things you should know when arriving
at Fortaleza Airport.

Fortaleza Airport is a modern structure. Remodeled in 1998 and again in 2014 to handle up to 2.5 million annual passengers. The terminals are air conditioned and kept very clean throughout. It has a well organized floor plan and isn't very big. So it's really easy to get around, and better yet, get in and get out of!

HISTORY : The Fortaleza Airport runway was built in the 1930s and used by the Ceará Flying School until 2000. During World War II, the airport was an important military base supporting the Southern Atlantic Allied Forces. In 1952 the original name, Cocorote Airport, was changed to its present name Pinto Martins International Airport. In 1966 a passenger terminal and apron were built. Those facilities are at present "The Old Airport" or in Portuguese " O Aeroporto Antigo" and provides the necessary space for general aviation operations by small aircraft and helicopter flights. 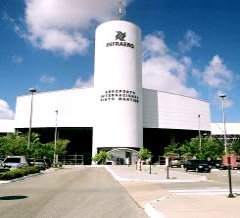 LOCATION:
Pinto Martins International Airport
is centrally located within the city
limits of Fortaleza. Only 8 km from
the city center and approximately
10 km from the beaches surrounding
the city.

Once you have your bags and have made it through the swinging doors. You will find yourself on the main level which sits between the upper level and lower (ground) level. If you continue across to the other side of the terminal and exit the building you will see the taxis lined up along the sidewalk.

Buses to the city center are available on the ground level. If you have luggage or arrive late in the day they would not be the best choice of transport! There are no direct city buses to the beaches. 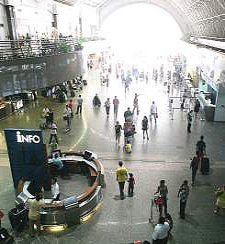 All 31 of the check in counters are on the main
level as well. After checking your bags take the
escalator to the upper level where you will go
through security and the X-Ray machines and
on to the Departure Lounges.

Conveniently located alongside the boarding
terminal are the Restaurants and Cafes including
a Bob's Burger, a Chinese Restaurant, gift
shops, and a book store, with a nice selection
of magazines.

BAGGAGE STORAGE:
Is available on the Main Level.

Fortaleza Airport-Hotel Private Car Service
Passengers will be welcomed by the driver holding a sign with
their name on it.

Fortaleza Airport Taxi Service
Helpful Advice Good Tips and a Complete List of Taxi Fares
and Destinations from the Airport.

Best Hotels near Fortaleza International Airport
The BOOKING.COM reservation service is free of charge. Best rate guaranteed. The reservation system is secure and personal information is protected. Payment by clients is always directly with their chosen hotel and in accordance with that hotel’s reservation policy.


Return from Fortaleza Airport to Homepage<